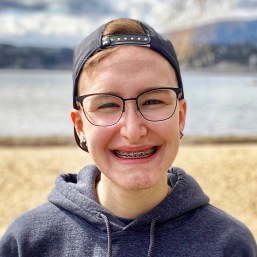 At 19 years old, V Copping is an extraordinary young leader and experienced speaker.  Through growing their popular Juice Box Recycling program at their elementary school, V Copping has inspired others to join them in raising funds to sponsor over 100 wheelchairs for children with disabilities in Guatemala.

In 2013, V Copping was invited to travel to Guatemala to learn more about the people and region and see the impact of their project on the lives of wheelchair recipients.

In November of 2014, V Copping gave a TEDx talk at TEDxKids@BC. They spoke about The Juicebox Project and the impact that it has made on the children of Guatemala.

Spring of 2015, V Copping partnered with Barbie, being selected as one of four young people across Canada to become a Barbie Super Squad Leader. Their video inspired young people to “Be Super” and help others in their community.

In October 2015, V Copping presented at the Volunteer Futures 2015 conference on the topic of her Juicebox Project. Their presentation also included a part on how to involve more young people in the aspect of volunteering.

Following their presentation, V Copping re-visited Guatemala in November of 2015. That experience allowed her to meet more recipients of wheelchairs through The Juicebox Project

In October of 2017, V Copping and their family travelled to Guatemala for a distribution trip. The team of 10 members distributed over 100 wheelchairs, 15 bags of food and clothing, and build a house for a family in need.

V Copping has attended a high school program that had a large component of leadership and community service. This program allowed them to improve their public speaking skills, as well as gave them many opportunities to contribute to their community. They completed their high school diploma through online and private school in 2020. Currently, V Copping is attending the University of British Columbia in Kelowna, British Columbia and pursuing a Bachelor of Arts in Philosophy-Political Science-Economics.

They also are a member of 4-H, learning leadership skills, record bookkeeping, how to care for their project as well as receiving awards for her public speaking at the club, district, regional, and provincial 4-H levels.