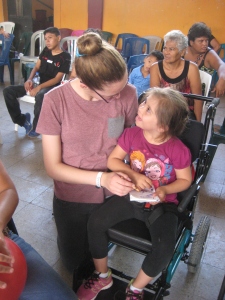 In October 2017, I had the amazing opportunity to visit Guatemala for the third time.

I went with a group through Hope Haven Canada, and there was 10 (from Canada) of us in total.  It was an amazing trip!  While in Guatemala, we gave out 100 wheelchairs and built a house.  Some of the wheelchair recipients received them for the first time, others needed a new one or had been borrowing from a neighbour or friend.  Of those who needed them for the first time, most had not been waiting their whole life.  There were a lot of seniors who could no longer walk as well as they could in their younger years.  There was also people like a 16-year-old boy who was shot 10 months ago in the back while at the river, and as a result could no longer walk or a 20-ish-year-old who dove into a pool a year ago and hit his head leaving him without the ability to walk.

It was amazing to see how changed these people were from receiving a wheelchair.  To them, it was a gift of freedom and an opportunity to have a new start in life.

However, it was hard to see these people, who not that long ago were fully functioning people, and suddenly they can’t walk.  It’s a good reminder of how quickly things can change.

We built the house for a widowed dad, his mother, and his two teenage children who are both studying grade nine.  They were so thankful for the house that we built them.  They went from having a “house” built out cloth, plastic, cardboard, and whatever else they could find, to having a house made of good quality tin, and a front door that locks.

The hardest part for me while in Guatemala was doing “home visits”.  Going into their houses and villages gives you a good view of how they live, and the amount of poverty in this country.  We gave them food, clothing, and shoes.  I would struggle to live in the conditions that these people live in. I would never think of drinking the water that sat in a “sink” (water basin) beside a dirt road. I’m also not sure if I’d be willing to walk half an hour to the river to take a bath or wash clothes.  This trip has been a huge reminder of how blessed we are in Canada, and how thankful I need to be for everything we have.

Some really neat things that I got to do while in Guatemala was drink coconut water directly from a coconut that I watched get cut off a tree, and I also got to roast marshmallows over a hole in the ground heated by lava from the nearby volcano that we hiked!!

I would like to thank everyone who supported The Juicebox Project to make this trip happen, and for the continued support that allows us to change more lives through sponsoring wheelchairs for children in Guatemala.

I’d invite you to take a few minutes to watch a video summary of the trip!

View all posts by Veronika